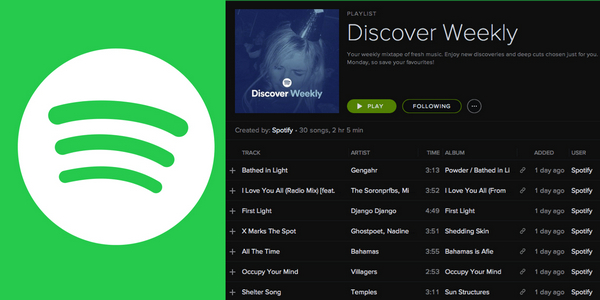 Spotify is embarking on a new way to make money from its product in addition to established revenue generators, like converting as many of its tens of millions of active users as possible into paid subscribers to its premium tier.

The company announced one such new moneymaker today. Spotify is now going to start letting brands sponsor the music streaming giant’s Discover Weekly playlist, one of the most-liked features of the service which generates a playlist of new music each week that refreshes every Monday based on guesses made about the user’s preferences.

The first such advertiser is Microsoft, which is — appropriately, given the nature of Discover Weekly — running an artificial intelligence-based ad campaign called “Empowering Us All.” Said Microsoft general manager of global media Erin Bevington in a statement released today, “At Microsoft we are focused on empowering every individual and organization to do more. Our work in AI is a central part of that mission to unlock human ingenuity.

Our partnership with a technology innovator like Spotify offered a way for us to effectively share that message within a personalized entertainment experience powered by AI.

A Spotify representative confirmed to Billboard that the sponsorships would include a mix of in-playlist and native ads similar to the way existing sponsorships of other Spotify editorial playlists are handled. As far as Discover Weekly itself, it’s one of the company’s most prominent (and arguably valuable offerings), given that according to Spotify users who regularly listen to their version of the playlist end up streaming more than double the content of users who don’t.

In other words, the playlist is seen as offering a well-curated mix of songs thanks to the personalization technology that powers the playlist’s curation.

Personalization has quickly gone from a nice-to-have to an expected consumer experience that delights audiences, and marketers are craving opportunities to be part of it,” said Spotify global head of partner solutions Danielle Lee about today’s announcement. “Our new Discover Weekly ad experience positions advertisers for success and ensures that our fans are hearing messages that embody the ethos of discovery.

Extra Tip: How to Download Spotify Music to MP3

As we all know, Spotify adopts DRM to restrict us to listen to Spotify songs with Spotify app and deny us downloading songs from Spotify as MP3 files. No worry though, here we meet NoteBurner Spotify Music Converter.

It is a top-rated Spotify music downloading and converting tool, dedicated to helping Spotify users download and convert any Spotify track, album, artist and playlist to MP3, AAC, WAV, and FLAC  format. With an advanced DRM decrypting technique that differs from traditional recording, it can keep the original audio quality and ID3 tags of the music in output files. In this case, you can easily download and convert all your songs or playlists from Spotify to MP3 format with ease.