Spotify for Xbox One Now Works with Cortana Voice Commands 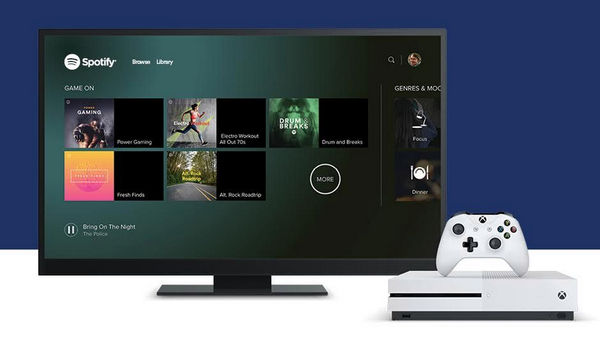 Spotify arrived on the Xbox One back in August 2017 to give gamers the option of streaming their own tunes while in a gaming session. Today, Spotify is upgrading its app with a few key additions, including most notably support for Cortana voice control, along with other personalization features. With Cortana, gamers will be able to speak their music requests instead of using the controller. That means they can command the music — including being able to play, skip and pause songs — without having to leave their current gaming session, Spotify says.

Before, gamers would have to use Spotify Connect via an app on their phone, tablet or laptop to control or change the music while gaming.

This upgrade is currently only available in the U.S., however.

The new app is also introducing an updated experience that’s designed to make it easier for Spotify users to access recently played songs, plus your “Made for You” hub, and your music library.

Previously, Xbox One users only had access to basic Spotify controls, like play, pause, and skip plus visuals like the cover art and artist and song name. Now, they have personalized content recommendations, and the ability to playback content right from the Guide menu.

Options like repeat and shuffle are available, too, as are a selection of curated gaming playlists, over on Spotify’s “Gaming Hub” if you get stumped as to what to play.

In the future, updates to this Enhanced Background Mode, as Spotify calls the new experience, may include the ability to promote game specific content for major game launches, Spotify says.

The update will require the latest version of the Spotify app, which can be downloaded from the Microsoft Store, the company notes.

Tips: How to Keep Spotify Music Playable after Canceling Subscription

As we all know, Spotify encodes all its music with digital rights management (DRM), which restricts you from listening to downloaded Spotify music after canceling Premium subscription. In this case, to keep all of your downloaded tracks or playlist playable after unsubscribing the service, you need to remove the DRM protection from Spotify music first.

NoteBurner Spotify Music Converter is a professional Spotify Music DRM removal tool, which can easily remove DRM from your Spotify music or playlist and convert them to DRM-free format like, MP3, FLAC, AAC or WAV at 5X speed with 100% original audio quality kept. With its help, you will be able to enjoy all of your downloaded Spotify tracks freely even after canceling Premium subscription and keep them on your devices forever.