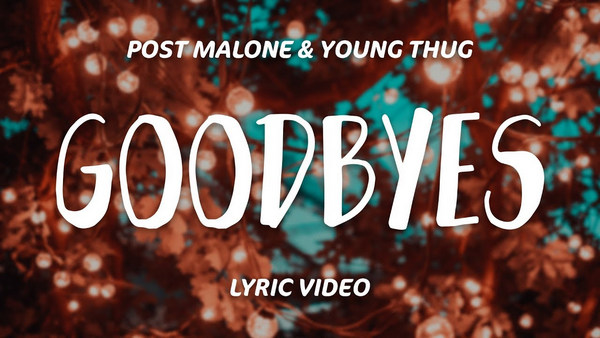 Post Malone’s had a big year, even without releasing a new album. His Swae Lee collaboration “Sunflower” has held its own on the Billboard Hot 100 with a coveted 36 weeks on the charts. Other tracks like “Wow.” have maintained their chart position, peaking at No. 2 in April following Lil Nas X’s smash hit “Old Town Road.” Now, the genre-bending vocalist has released a new collaboration with Young Thug that’s almost certain to top the charts.

Titled “Goodbyes,” the four-minute single arrives with its own video that finds Posty in the middle of a gang fight, being stabbed to his death before being resurrected as a Wild West zombie. Thugger makes an appearance as a bar entertainer before being joined onstage by Post Malone.

Tutorial: How to Set Post Malone “Goodbyes” as Ringtone

Love Post Malone’s new tack “Goodbyes”? Wonder if there is a way to download it from Spotify or Apple Music as an MP3 file for setting as a ringtone? Well, you are in luck, here we are about to share you an easy yet effective method to help you download Post Malone “Goodbyes” from Apple Music as MP3 format and use as phone ringtone.

The following is the detailed tutorial to teach you how to download Post Malone “Goodbyes” from Apple Music to MP3 format and set as ringtone. Please download NoteBurner Apple Music Converter first before getting started.

Step 1: Add Apple Music Songs
Launch NoteBurner Apple Music Converter and click the button “+” to add music, it will pop up a window, which will show you all of the songs you have downloaded from Apple Music. You can choose any song you want to convert.

Step 2: Choose Output Format
After adding the song successfully, please click the button “Setting” to choose the output format as you need, in the pop-up window, you can choose output path, output format, and output quality. WAV, AAC, MP3, and FLAC are available to choose from.

Step 3: Convert Apple Music to MP3
After completing the above steps, the final one is clicking the button “Convert”. Just a few seconds, it will succeed.

After conversion, click the “History” button in the main interface to find the output audio. Now, the converted song is DRM-free, you can transfer and enjoy it on any of your devices without restriction.

Directly drag the track from the folder to the program interface. Edit the fragment you want for the ringtone. After edition, please select “Save & Import”.

Finally, please find the ringtone file you just imported into your iPhone and set it as your special ringtone