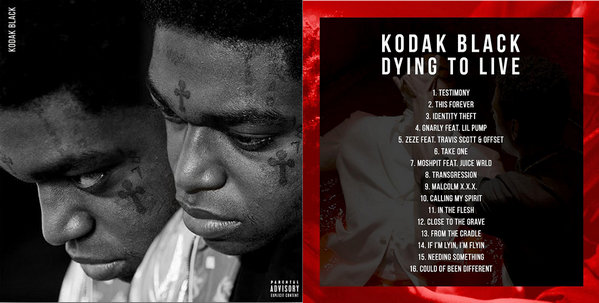 Kodak Black captured his first No. 1 on the Billboard 200 chart, as The 21-year-old Florida star’s second LP Dying to Live rockets onto the chart at No. 1, arriving as the most popular albums of the week. “Dying to Live”, released on Dec. 14, is 16 tracks long and features guest appearances from Offset, Juice WLRD, Travis Scott and Lil Pump. As reported, the set garnered over 89,000 equivalent album units in its first week: 5,000 of those were traditional album sales, while the other 84,000 sales came from streaming and track numbers on hits like “Zeze.”

Now all 16 songs in “Dying to Live” are available on major streaming music services. Here we will show you how to download Kodak Black’s “Dying To Live” full album from Spotify to MP3 for enjoyment.

It is generally-known that Spotify protects all its music with DRM lock. Even if you get the Spotify Premium plan which gives you unlimited ad-free high quality streaming as well as the ability to download music offline, it is impossible to convert Spotify music to MP3 format. However, you are in luck, now there are many Spotify converters come to help you solve this puzzle. Among them, the top-rated one is NoteBurner Spotify Music Converter.

NoteBurner Spotify Music Converter is a powerful Spotify music converting tool, well-designed for any Spotify users, both free and premium to download and convert any track, album and playlist from Spotify for offline playback on more devices. Equipped with an unique encoding technology, this smart tool  can work at up to 5X faster speed when downloading music from Spotify. Furthermore, it supports saving Spotify music in several popular output formats, including MP3, AAC, FLAC and WAV. With its help, you can get rid of the restriction of DRM, and download Kodak Black’s “Dying To Live” full album from Spotify to MP3 format with ease.

The following is a detailed tutorial about how to download Kodak Black’s “Dying To Live” full album from Spotify to MP3 format. Please download NoteBurner Spotify Music Converter on your computer first before getting started.

After customization, click “Convert” button to start conversion. After conversion, you can find the converted audio files by clicking history button.

Congratulation! Now the album “Dying To Live” has been converted to MP3 format, you can transfer all the songs to any devices for listening anytime anywhere.