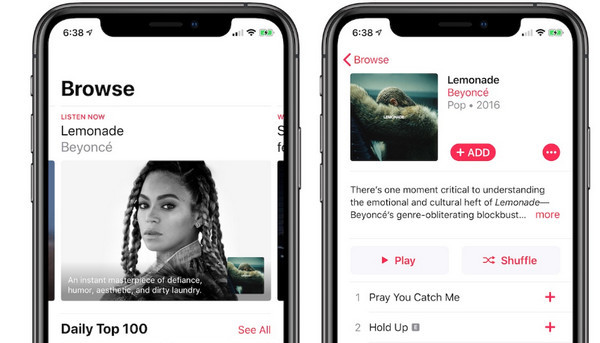 In April 2016, Beyoncé launched her sixth studio album “Lemonade” worldwide. While the album was available for Apple users to buy for $17.99 on iTunes at launch, it was never put on Apple Music or Spotify and remained a streaming exclusive on Tidal for three years, until today.
Now, both Apple Music and Spotify subscribers can listen to the 13 track album (with an original demo version of “Sorry”) for the first time. Apple is highlighting the launch on the main carousel in the Browse tab on Apple Music, along with the live album of “Homecoming,” the documentary about Beyoncé’s 2018 Coachella performance.

More recently, Beyoncé and Jay-Z launched a collaborative album under the name “The Carters,” which only remained a Tidal exclusive for two days and then launched across streaming services in June 2018. Before that time, Jay-Z quietly removed many of his albums from Apple Music in April 2017, but most eventually came back. His own album “4:44” had one week of Tidal exclusivity before appearing on Apple Music in July 2017.

Although it’s three years old at this point, “Lemonade” was a huge bonus for Tidal and a way for the company to encourage fans to sign up for the service. The end of its exclusivity follows a rough year for Tidal, with numerous reports about late royalty payments to artists, inflated streaming numbers, and potential data breaches emerging in 2018. The news of late royalty payments and inflated numbers came from Norwegian site Dagens Næringsliv, which specified that Tidal had inflated streaming numbers for “Lemonade”.

Some people may want to download Beyoncé’s ‘Lemonade’ from Apple Music to MP3 format, but always be stopped by its protection. In this case, you are supposed to turn to a powerful Apple Music converter.

Among all the Apple Music converting tools at present, the most powerful and handy one is NoteBurner iTunes DRM Audio Converter. Developed by NoteBurner Company, it is adopted with an innovative decryption method that can completely remove DRM protection from Apple Music songs, while converting them to DRM-free MP3, FLAC, AAC or WAV format at 10X speed. And it is no need to wondering about the quality loss, all the converted files are lossless. Besides, the smart tool is also capable of converting protected iTunes M4P music and audiobooks to other popular formats.

The following is the detailed tutorial to teach you how to download Beyoncé’s ‘Lemonade’ from Apple Music to MP3 format. Please download NoteBurner Apple Music Converter first before getting started.

Step 1: Add Apple Music Songs
Launch NoteBurner Apple Music Converter and click the button “+” to add music, it will pop up a window, which will show you all of songs you have downloaded from Apple Music. You can choose any song you want to convert.

Step 2: Choose Output Format
After adding the song successfully, please click the button “Setting” to choose the output format as you need.

Step 3: Convert Apple Music to MP3
After completing the above steps, the final one is clicking the button “Convert”. Just a few second, it will succeed.

After conversion, click the “History” button in the main interface to find the output audio. Now, songs from ‘Lemonade’ are MP3 files now, you can transfer and enjoy them on any of your devices without restriction.