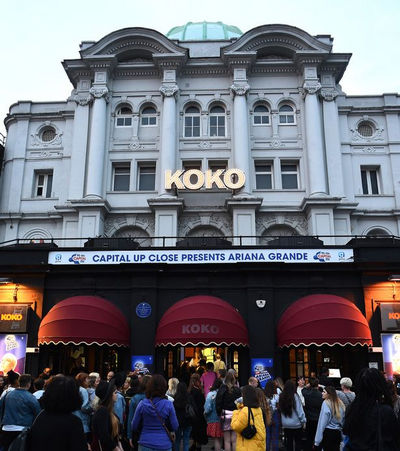 Ariana Grande wowed fans with a sensational performance as she returned to the UK.

The Dangerous Woman hitmaker performed in London tonight at Capital’s Up Close concert at Koko.

It’s the first time the 25-year-old has performed in the UK since her One Love Manchester concert, which she organised to raise funds for the families of those killed at her concert in the city in May, last year.

Ariana put on an epic performance for the intimate crowd, working her way through her hits, including No Tears Least To Cry and God Is A Woman.

In a series of videos posted on Capial’s official Twitter page, the crowd is seen going wild as Ariana rocks her signature high ponytail, an oversized jumper dress and knee-high boots for her show-stopping concert.

The crowd sang along as Ariana ended her show with an a capella rendition of One Last Time.

Love Island winner’s Jack Fincham and Dani Dyer were amongst the crowd, and posed up for a selfie with Capital breakfast host Roman Kemp.

It comes after Ariana dropped a huge hint that she may be returning to Manchester’s MEN Arena.

Last month, she posted a list of UK tour dates on the app on Friday – then quickly deleted it.

However, eagle-eyed fans had already seen it and taken screen-grabs.

One fan, who shared the grab, wrote: “This was posted on Ariana’s snapchat regarding tour dates but she deleted it quickly after, did she do it on purpose?”

Another said: “What happened there – is she teasing us?”

The venues listed included a to-be-confirmed date at Manchester Arena.

Ariana, who recently got engaged to Peter Davidson, has opened up about suffering panic attacks ever since 22 of her fans were killed when a suicide bomber targeted her concert.

She told Vogue magazine: “I couldn’t breathe, I felt upside down”, she said.

“It’s hard to talk about because so many people have suffered such severe, tremendous loss. But yeah, it’s a real thing. I know those families and my fans, and everyone there experienced a tremendous amount of it as well. Time is the biggest thing.”

Later, she told Elle : “When I got home from touring, I had really wild dizzy spells, this feeling like I couldn’t breathe.

“There were a couple of months straight where I felt so upside down.”